Abu Reda: Salah Mazajh high .. Agiri does not fear any competitor .. Andvantino will attend the opening 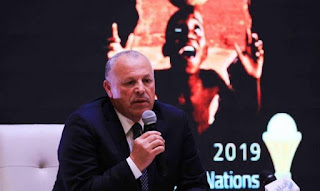 Abu Reda: Salah Mazajh high .. Agiri does not fear any competitor .. Andvantino will attend the opening

Hany Abu Reda, President of the Egyptian Football Federation, said that the Mexican national coach Javier Aguirre has a high spirit and does not fear any competitor in the African Cup of Nations.

Egypt hosts the 32nd African Cup of Nations from 21 June to 19 July with 24 teams for the first time.

"Mohamed Salah came to the team this time and (his temperament) after the coronation of the Champions League and finishing the English Premier League as his goal, and that does not mean he was not happy before," Abu Reda said during his tour.

The President of the Egyptian Football Federation, said that Gianni Infantino, President of the International Federation of Football despite his busy with the World Cup in France and Cuba America in Brazil, but he will come to Cairo on Friday to attend the opening of the tournament and then travel to Brazil.

Abu Reda concluded his speech by pointing out that the problems experienced in the ongoing version of the league championship will not be in the next season, noting that the club will discuss the club so as not to repeat the problems.