Ahmed Ahmed talking about the secret number "9" with Egypt .. A message to Sisi .. And the candidate candidate 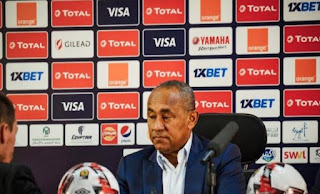 Ahmed Ahmed talking about the secret number "9" with Egypt .. A message to Sisi .. And the candidate candidate

"I thank Sissi for his approval and welcome him to hold the tournament on the ground in Egypt in just five months," he said during a press conference held Thursday.

He continued: "We got help from everyone, either through the Egyptian government or the Football Association next to the members of Viva, and all preparations were made in a great way and great for the establishment of this tournament."

He continued: "Egypt is a big and ancient country, this is the fifth time that the African Cup of Nations is organized, and No. 9 special for Egypt after the organization of the championship 1959 and 2019."

"We, as Muslims, have an individual figure that has a special place for us," he continued.

"I feel comfortable now, and all the members inside Kee are also comfortable," he said.

"I think the best is who will be the champion of the current version," said Ahmed Ahmed.

The African Nations Cup is set to begin on Friday with Egypt at the Cairo International Stadium in the first round of the group stage.