Al-Shennawi: I wish to crown the nations of Africa .. And civilization is a myth will not be repeated 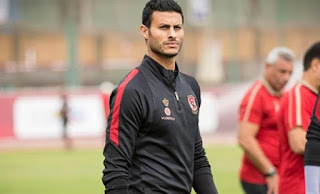 Al-Shennawi: I wish to crown the nations of Africa .. And civilization is a myth will not be repeated

Mohamed Al Shennawi, goalkeeper of Al Ahly and Egypt team, that the representation of any player to his country's honor, noting that everyone plays in one spirit does not matter who participates and who sits substitute.

Mohammed Al-Shennawi said during his tour of the Al-Luaib program that Ahmed Al-Shennawi and Mahmoud Jensh guarded the team with great stars and the competition among them is strong to guard the team's African Cup of Nations.

Egypt will start the African Cup of Nations, which host their next edition of the match against Zimbabwe on Friday (June 21st).

"He is a legend that will not falter, even if he achieved half of what he deserved, I will consider it an achievement," Al-Ahli told Al-Ahly. "He was practicing with all seriousness for us before the World Cup with the same intensity and I was happy to participate against Saudi Arabia."

Al-Shennawi concluded his speech by stressing the importance of public attendance to support the national team, promising them to crown the championship.