Daily Mail: Giorgio may follow in the footsteps of Sari and leave for Juventus 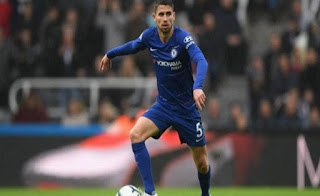 Daily Mail: Giorgio may follow in the footsteps of Sari and leave for Juventus

Chelsea midfielder Giorginho may leave for Juventus on the summer transfer market after Mauricio Sari takes over as the old lady, the Daily Mail reported.

Giorgione was linked to the transfer to Juventus this summer after Sari took him to Chelsea last season when he was a Blues manager.

For his part, the player's agent commented on the news of the departure of his client this summer, saying: "Anything may happen in the transfer season."

"Giorgione has a four-season contract with Chelsea," said the 27-year-old's agent.

Giorgini's move to Juve, although in Naples, he replied: "No problem, my client is a professional player."

Giorginiu was led by Mauricio Sari twice when he was in Naples and Chelsea, and it might be the third time if he left for Juventus.

Giorgione refused to leave for Manchester City last summer, preferring to move to Chelsea after Sari asked him to sign him.

The Italian midfielder and Brazilian assets player played in his first season with Chelsea 54 games in which he scored two goals.