Egypt's rival .. Zimbabwean players are absent from the game amid reports of refusal to play 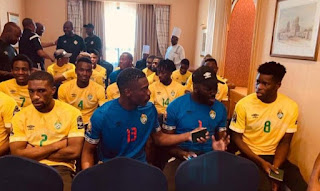 Egypt's rival .. Zimbabwean players are absent from the game amid reports of refusal to play

The Zimbabwean team for the final match before the match against Egypt in the opening of the Nations of Africa, amid reports of refusing to participate in the tournament held in Egypt 2019.

The captain of the Zimbabwean team, scheduled for 7 pm, did not see the team heading to the railway stadium.

A Zimbabwean journalist, Howard Mosonza, said the players refused to leave the hotel on Thursday and held a meeting of the officials of the football association at the residence, with the threat of not playing in Egypt. Some of them booked airline tickets to leave the country for reasons of not receiving their dues Finance.

The opening match for the African Nations will take place on Friday at Cairo Stadium between Egypt and Zimbabwe.