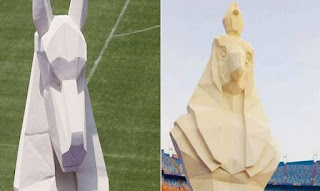 The great criticism of the Organizing Committee of the African Cup of Nations for the selection of Anubis, the god of ancient Egyptians, to guard cemeteries and mottos and guide them to the other world, leaked new images of alternatives to the opening ceremony.

Khaled Anani, Minister of Antiquities announced Thursday morning that the statue of Anubis will be withdrawn from the Stadium of Cairo International Stadium, indicating that it will not be part of the opening ceremony.

The Minister of Antiquities admitted to the press that the choice was not successful and that the existence of what he called the "god of death" at the opening ceremony of the nations of Africa is not justified.

But does the statue of Anubis spoil some of the paragraphs or plans of the concert, which was leaked mostly through the social networking platforms "Facebook" and "Twitter"?

Ashraf Sobhi, Minister of Youth and Sports confirmed that there are several nominations from the Ministry of Antiquities for symbols and icons important in ancient Egyptian history to appear at the opening ceremony instead of Anubis.

Preliminary images before the decision to withdraw Anubis showed the presence of another statue of a goddess called "Sekhmet" in the era of BC, a stereotype of the body of a lady and the head of a lioness, representing war and anger.

But Sohmat did not take the same share of Anubis from the attack and the criticism remained safe in place to get a free invitation to attend the Cairo stadium on Friday evening and participate.

A few hours after the decision to withdraw Anubis from the opening ceremony, new pictures of one of the most famous ancient Egyptian goddess Horus were leaked, but he was met with criticism from a completely different angle of mastery in sculpture and making.

The cooperation of the ministries of archeology, youth and sport may result in the emergence of other statues related to the ancient Egyptian civilization, but away from symbols of death such as Anubis, so that the criticism and attack will be prevented again after the ceremony.

Tutankhamun, known as the young king, has gained international fame from the discovery of his tomb in all its treasures before the thieves reached it.