Marwan Mohsen: I love playing in the public atmosphere .. I do not turn to criticism 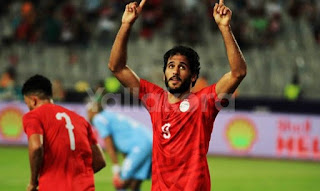 Marwan Mohsen: I love playing in the public atmosphere .. I do not turn to criticism

Marwan Mohsen, Al Ahli's striker and Egypt's national team, said he was dealing with criticism normally after he was interested in it, but now he is no longer wrapping himself up and calling everyone to speak as he wants.

Marwan said during a meeting with Al-Allaib program: "Any coach comes to see me in the past I train seriously and pay me because he sees me train well and not love me .. There are periods of participation and others do not but I make up in the past so I am always ready and the decision of the technical director "He said.

"I like to play in the public atmosphere, whether with the club or the team, and I will do everything I can with the team with my teammates and, God willing, we will win the championship."

Egypt will start the African Cup of Nations, which host their next edition of the match against Zimbabwe on Friday (June 21st).

Marwan concluded by stressing the importance of the public presence to support them during matches at the Nations Cup, and the indication that all players will be responsible.