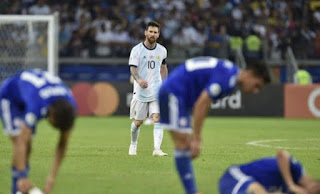 Lionel Messi gave Argentina the chance to qualify for the next round of the Copa America with an equalizer against Paraguay in the early hours of Thursday in the second round of the tournament.

Paraguay took the lead in the 37th minute after Richard Sanchez made a pass in the penalty area before the referee turned to VAR in the 52nd minute of the second half to score a penalty for Messi in the 57th minute.

The Paraguayans came back again in the 62nd minute but Argentina keeper Armani blocked the penalty kick by Sanchez and ended the match with a draw.

The draw drew Argentina to their second point in second place, while Qatar are third with a goal difference from Tango.

Here is a summary of the events:

Quick start by the players of Argentina with the first minutes of the game Messi and connected the ball in the fifth minute to the right of the stadium to be included within the penalty area before the Paraguay defense came out passing by cross.

20 minutes into the first half, Argentine pressure is still on and Paraguay's defense is still a shock.

In the 28th minute Paraguay's first threat came from inside the box from Gonzalez and Armani took the corner kick into the penalty area, but Gonzalez hit the ball in the top of Argentina's net.

In the 34th minute, Argentina got a free kick right up to Paraguay's penalty area, which Messi put in the keeper's hands.

And in the 37th minute around Richard Sanchez cross in front of the penalty area to Paraguay's first goal against Argentina.

In the 44th minute, Argentinian goalkeeper Armani tried to dodge Paraguayan striker Gonzalez, who almost broke the ball. The Paraguayan keeper made a mistake and received a yellow card amid protests from Paraguay's players to give the referee a red card.

The referee announces 4 minutes rather than lost time.

The referee gave the whistle for the end of the first half of the game with a 1-0 lead.

Summary of the second half:

The second half began with a quick attack by the Paraguayan side, which was taken away by Argentina's defense of the corner and Messi, who returned to secure his goal with his teammates.

In the 51st minute Aguero equalized for Argentina but the ball sent by the head to the bar to reach the Messi, who pays it in the hands of the Paraguayan goalkeeper to go to the corner and the referee resorted to "VAR" to score a penalty for Argentina when he touched the Paraguay defender with the ball in his hand.

In the 57th minute, Lionel Messi successfully lobbed the ball to the left of Paraguay's keeper, who almost came up against it.

In the 61st minute, Paraguay were awarded a penalty by Nicolas Ottamende.

In the 62nd minute Armani, Gonzalez's penalty kick saved a weak ground on his left.

In the 66th minute, Scaloni, Argentina's coach, made the first change with the participation of Angel Di Maria, replacing Luatro Martínez.

In the 76th minute De Paul's pass to Messi came in the penalty area, but he shot off the goal.

90 minutes and the draw continues after a mutual control of the ball in the last ten minutes.

The referee counts 7 minutes rather than lost time.

The match ended with a positive draw for each team.