President of Housing & Development Bank: We are proud to contribute to supporting the African Championship 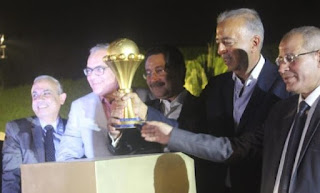 President of Housing & Development Bank: We are proud to contribute to supporting the African Championship

Fathi Al Sibai, President of the Housing and Development Bank, said he was proud to contribute to sponsoring the African Cup of Nations, pointing out that he was confident of the success of the tournament thanks to the efforts of the state.

Sibai made the remarks in a special statement to "Yalla Koura" on the sidelines of a press conference held on Wednesday to host the African Nations Cup, organized by Egypt from June 21 to 19 next month.

He added: "Our presence with the rest of the sponsors and the efforts of the state indicates Egypt's ability to organize, especially after the processing of stadiums and hotels in a few months."

"We do not care about football alone, but we sponsor Egyptian champions in all individual games," he said.