Rafik Halish: We forgot the 2010 match .. Algeria did not come to face Egypt 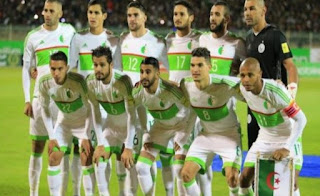 Rafik Halish: We forgot the 2010 match .. Algeria did not come to face Egypt

Rafik Halish, the Algerian national team player, said that his country did not come to face Egypt, but to play in the African Nations Championship, stressing his admiration for the atmosphere, accommodation and training venues.

"The team camp in Qatar was a good opportunity to adapt to the hot weather, and after arriving in Egypt, we found the atmosphere much better," Hleish said in remarks on the sidelines of Marrane.

"Algeria's game against Egypt 2010 has been over 10 years and we have forgotten it completely and now our thinking is to present a good tournament and Egypt is not at least an opponent in the group stage."

"We did not come to play against the Egyptian team. We came to participate in the tournament and we are working to win it."

"There is no easy team in Africa, all levels are close, and whoever bears the best is able to win the championship," he said of the team's position in Senegal, Kenya and Tanzania.

"Not to participate in friendly matches is for the coach, and we are 23 players. We have to put all our energy at the disposal of the coach."

"The atmosphere in Egypt is distinctive, the hotel is very good and the stadium we are training is excellent," he concluded.