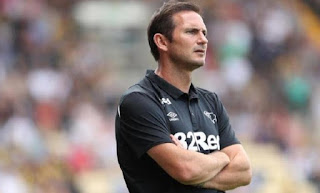 Frank Lampard, manager of Derby County, told his players that he would leave the team to lead Chelsea in the new season.

According to the Mirror newspaper, Lampard is waiting for an appropriate offer from the Chelsea management to lead the Blues in the new season.

Lampard has been linked to the departure of Stamford Bridge to lead Chelsea, rather than Italian Mauricio Sari, who recently left to take charge of Juventus.

Chelsea are looking to settle the coach's profile before the start of the new season, especially as the London team will start a difficult start in his career both internally and externally.

Chelsea are set to start their Premier League campaign against Manchester United before the Blues go out to face Liverpool in the European Super Cup.

Chelsea have been able to win the European league title recently after beating arch-rivals and arch-rivals Arsenal 4 goals in a match against the two teams at the Baku Olympic Stadium.

Chelsea finished last season in third place behind both runners-up Liverpool and Manchester City in the last two editions.