The return of Obama .. The rehabilitation of Abdul Aziz .. And the continued absence of tripartite team 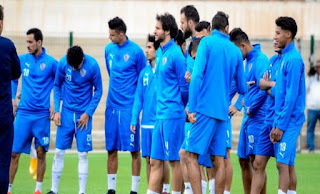 The return of Obama .. The rehabilitation of Abdul Aziz .. And the continued absence of tripartite team

Zamalek striker Marna was released Thursday evening at his home in Mit Okba in preparation for his remaining matches in the league after the African Cup of Nations.

The training saw the participation of the team's playmaker Yusuf Obama on his return from Saudi Arabia recently, while Mahmud was absent from the training; for his presence on the northern coast while Hamdi al-Nakaz and Hamid Ahad continued to lack access to Cairo from Morocco and Tunisia.

On the sidelines of Al-Muran, Mahmoud Abdul-Aziz, the midfielder, conducted training under the supervision of the medical team of the team; he was present at the gymnasium of the club to perform some training and rehabilitation.

In the absence of international players: Mahmoud Jensh, Mahmoud Alaa, Mahmoud Al-Wensh and Tariq Hamed; they are on the national team's list, as well as Ferjani Sassi in Tunisia and Khaled Boutaib with the Moroccan team.

Tunisia's right-back Tunisian Hamdi Al-Naqaz is due to arrive in Cairo on Saturday from Tunisia for regular training with the team starting on Sunday, following the end of his break from the coaching staff.