The second crisis .. Cameroon players fail to travel to Egypt because of their dues 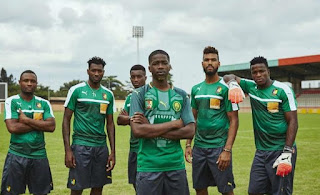 The second crisis .. Cameroon players fail to travel to Egypt because of their dues

The Cameroon team traveled to Egypt to participate in the African Nations Cup scheduled for June 21 to July 19.

The Cameroon mission was due to depart at 6:45 pm Thursday, but travel was delayed.

Orange Football said no one would say when the team would leave.

Cameroon have won the Nations Cup after winning the previous title in Gabon 2017, at the expense of Egypt in the final after winning two goals to the goal, to crown the fifth star and narrowed the gap with Egypt in the top of the teams crowned the continental title with 7 titles.

According to the website, players demanded their entitlements of 40 million CFA francs for sports officials in Cameroon.

The players were threatened not to travel for the tournament until they were paid.

A source with the Cameroonian Federation of the site, that the players are demanding double the amounts owed to them, where they did not get the benefits of 20 million francs only African.

Cameroon's sports ministry condemned the players 'position, saying it had paid all of the $ 20 million of the players' dues.

The Zimbabweans refused to play the last game on Thursday, to play Friday's game against Egypt in the opening of the Nations Cup, because of their dues arrears.