Yasser Rayan Laila Koura: My son wants to keep his loan outside of Ahli 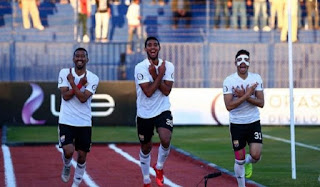 Yasser Rayan Laila Koura: My son wants to keep his loan outside of Ahli

Former star of Yasser Al-Ahli club Shaab Yasser Ryan has expressed his son Ahmed's desire to continue loaning him outside the walls of the Red Fort during the coming season.

"Ahmed wants to get a chance to participate and play mainly and a large proportion will continue abroad," Ryan said in private statements to Yalla Koura.

He added: "The player is now the right of Ahli after the end of his loan with El Gouna, but I have no influence on his decision whether to continue with Ahli or to come out again on loan."

The 21-year-old moved to Al-Gouna during the last transfer period, where he participated in 12 league matches, scoring six goals and making a goal.

Rayyan is one of Al Ahli's top players. He was promoted to the first team in 2017 to participate in seven matches, but he has only one goal.