Zimbabwe for "Yalla Koura": What happened was a "plan" ... and we are all a focus for Egypt 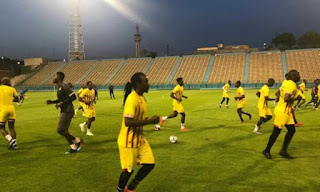 Zimbabwe for "Yalla Koura": What happened was a "plan" ... and we are all a focus for Egypt

The Zimbabwe Football Association announced on Thursday that the team was in full readiness to play the opening match of the 2019 African Nations against Egypt. The spokesman said that what happened was a mere change in plans.

"The Zimbabwe Confederation reiterates that the team is in full focus and ahead of tomorrow's game against Egypt," the Zimbabwe Football Association said in its official account on Twitter on Thursday.

A crisis broke out in Zimbabwe on Thursday after players refused to play the final match because of disagreements over their financial entitlement to the tournament.

But Zulwesani Joisela, a spokesman for the federation, completely denied the existence of a problem in his comments to "Yalla Koura": "The situation inside the team is fine, we have no problem, the team in full focus."

In response to the failure of the team to go to the railway stadium for the final race: "What happened was a change in plans, we are all in full readiness to Egypt."

He refused to talk if the team had done some training at the hotel or trained in another training ground, saying only: "I said everything I have."

Egypt play Zimbabwe on Friday in the opening of the African Nations Cup.