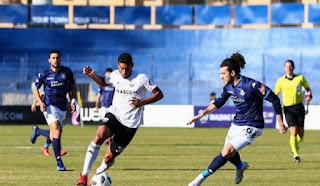 Ahmed Yasser Rayyan, Al Ahli club player Al-Maar, presented Al-Gouna with an apology to the audience in Egypt and the Zamalek fans in particular.

"I apologize to the fans of the Egyptian football team and the Zamalek fans," Ryan wrote through his official account on Twitter.

There was an altercation between Ryan and the Zamalek players in Sunday's match in the Premier League and ended with a 2-2 draw.