Report .. How did the sons of Zamalek and Ahli lose points in the league? 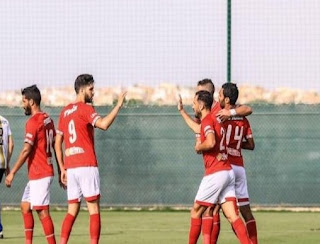 Ahmed Yassir Rayyan of Al Ahli of El Gouna scored a fatal goal Zamalek were put in trouble after a 2-2 draw with Al Sahili in Sunday's game of the 33rd week of the Premier League.

Zamalek have 69 points behind third-placed Al Ahli, who are in need of a win over the Contractors next Wednesday to resolve the Premier League.

It was not only the former Ahli who reduced Zamalek chances to win the league, where the sons of the club contributed to the loss of 9 points this season:

Zamalek started a series of wasted points by their sons in the seventh round against Smouha, when Hossam Hassan, who played in the youth sector at the White Club, scored a goal in the 1-1 draw.

Ahmed Samir, the former Zamalek player, spoiled the joy of the white citadel players in the 87th minute after scoring his second goal for the army's forerunners against Zamalek keeper Mahmoud Jensh in the 2-2 draw in round 23.

Zamalek lost two points in their two-leg fight after Ahmed Ali scored the equalizer for Arab contractors in the 80th minute in the 2-2 draw.

Zamalek lost the first three points to their former sons in the 30th round after former defending champion Ali Jabr scored a 1-0 win over Pyramids.

Zamalek had a goal from former player Khaled Amar in the second round of the league, but was not affected by the loss of points, where Zamalek swept the Union of Alexandria five goals.

On the other hand, Al Ahli lost 5 points to their former compatriots during the season. It was the first 3 points against Pyramids in the first round, when two of their former sons, Mohammed Farouk and Abdullah Al-Saeed, scored in the two-goal game.

The remaining two points were tied with Ismaili in the 18th round of the league championship when Karim Bambo, the former Red Card player, scored a goal in the 84th minute to score a point from Al Ahly.

This season saw two more players in the net against their former club Ahli, but succeeded in winning the match, namely, Mohammed Naji, "Gedo" player El Gouna and John Antoey, the star of Egypt clearing.

The big strike from Pakamani Mahlambe scored the fifth goal against his former club in the quarter-finals of the continental competition for his team Mamelodi Sundowns.